The Story Behind Juneteenth 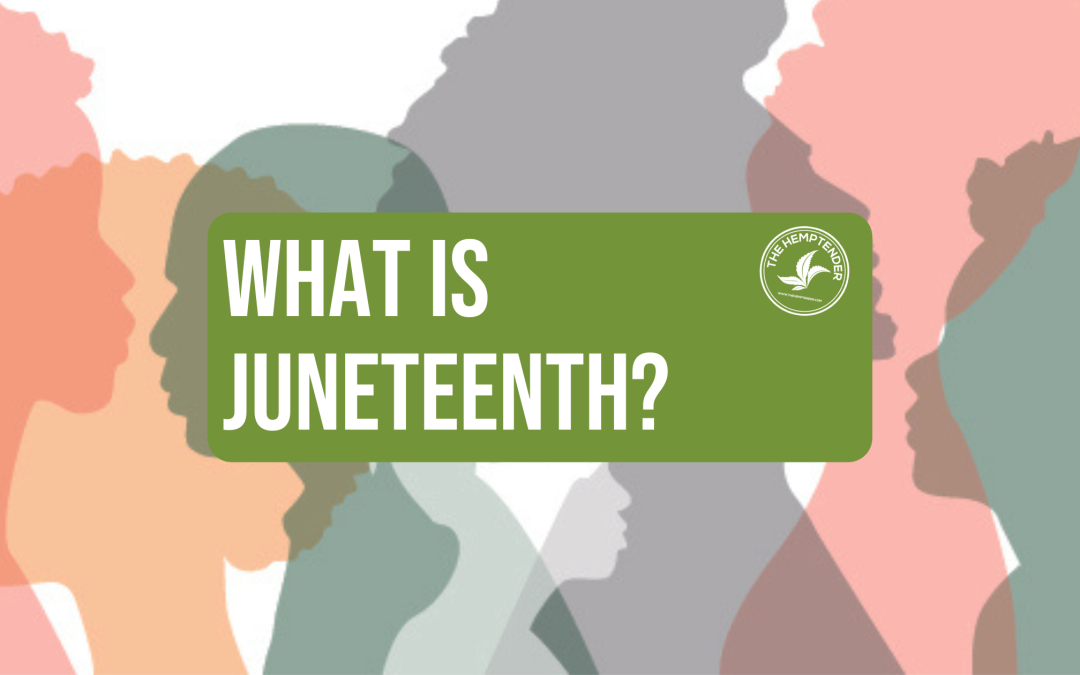 While it may seem like a newer thing, Juneteeth has been celebrated in African-American communities since 1866. However, it’s seeing a cultural revival more recently with so many leaps and bounds toward black equality and social justice. Below we’re going in-depth about what Juneteenth is, how it came about, and its cultural relevance today.

Juneteenth, also known as Juneteenth Independence Day or Freedom Day, is a federal holiday made official in 2021. Falling on June 19th, it celebrates the abolition of African American slavery in the United States and has evolved into a holiday celebrating black freedom and social justice.

What’s the story behind Juneteenth?

Even though slavery was abolished with the Emancipation Proclamation of 1863 after the civil war, many southern states chose not to get the memo. Many slave owners in the south picked up and moved to Texas, where slavery was still abundant, and the enslaved people in Texas were never told that they were free.

That changed on June 19th, 1865, an entire two years later, when Union General Gordon Granger traveled to Texas to read General Order No. 3, which officially freed all enslaved people in the south. He read in several locations all over Galveston and other areas of Texas to spread the word both to enslavers and to the formerly enslaved people directly to ensure these rights were no longer infringed upon. The order read:

“The people of Texas are informed that, in accordance with a proclamation from the Executive of the United States, all slaves are free. This involves an absolute equality of personal rights and rights of property between former masters and slaves, and the connection heretofore existing between them becomes that between employer and hired labor. The freed are advised to remain at their present homes, and work for wages. They are informed that they will not be allowed to collect at military posts; and that they will not be supported in idleness either there or elsewhere.” — General Order No. 3

Another year later, in 1866, the freed people in Texas organized the first of many annual celebrations to commemorate their freedom. At first, it was a holiday where families would get together, eat, spend quality time with one another and pray, and as it grew, it turned into picnics, parades, processions, and various other celebrations. African-American people would come back to Texas from across the country every year to celebrate their freedom with their families.

But as more and more people began to participate, the freed people needed places to celebrate. Segregation was still in full force, so black Americans weren’t allowed to meet in public parks or other venues where white people went. Instead, black ministers, business people, and community members pooled their money together to buy land, including Emancipation Park in Houston and several others, to celebrate Juneteenth peacefully every year.

Over the years, many more states pushed to make Juneteenth a federal holiday, and in 2021 it became official. Today, Juneteenth is celebrated among families at backyard barbeques and family gatherings. However, dozens of cities also recognize the holiday and host more significant events like parades and festivals with residents and local businesses.

In 2021 when Juneteenth became a federal holiday, a 5000-square foot mural titled “Absolute Equality” was painted on the spot where Union General Gordon Granger read the official order to free the slaves in Texas.

Other areas, including Atlanta and Detroit, hold massive music and cultural festivals to celebrate the holiday. But as awareness spreads, Juneteenth celebrations can be found in most U.S cities. 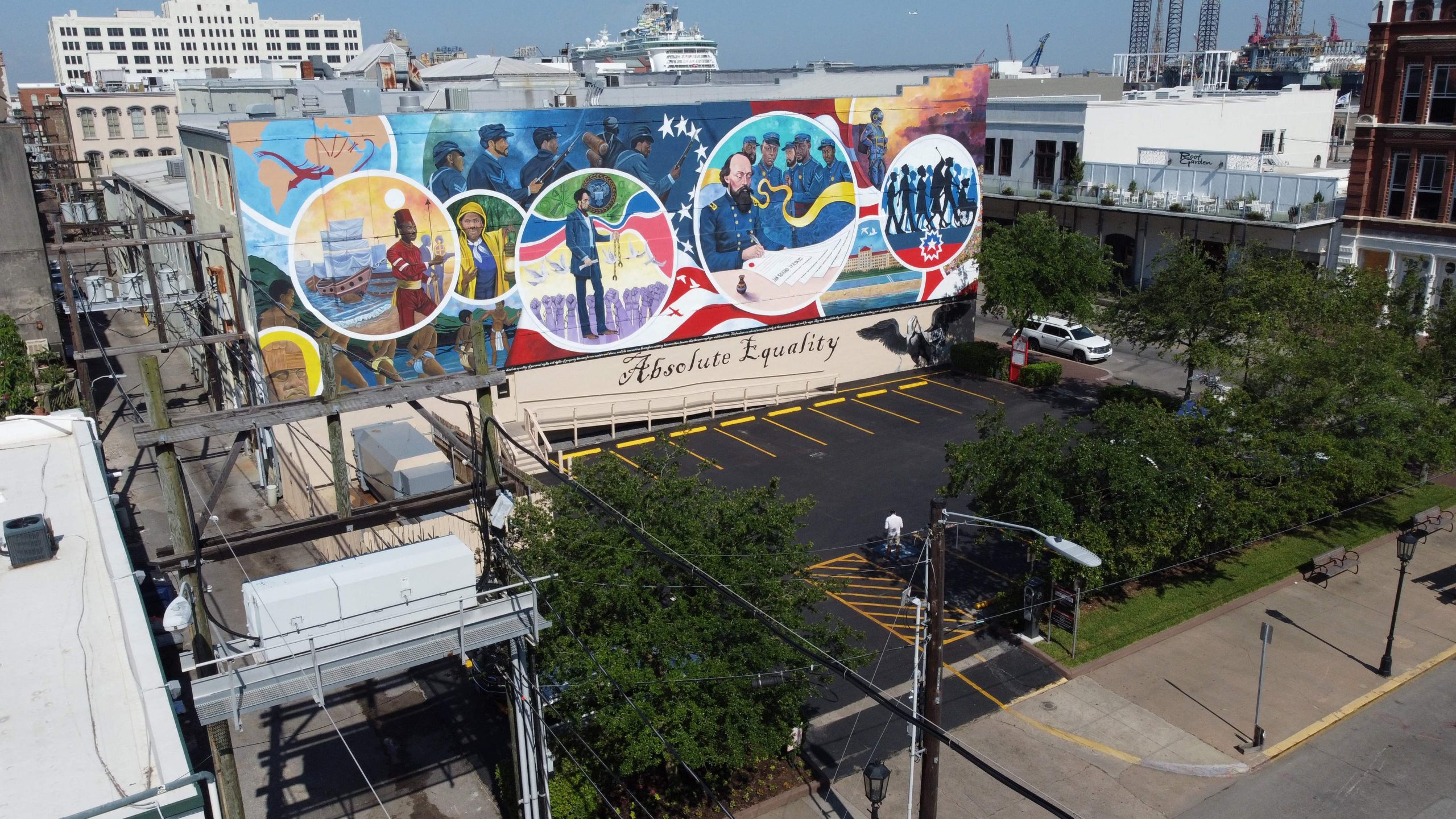 The “Absolute Equality” mural in Galveston, Texas, on June 16, 2021. – The mural, by artists Reginald C. Adams, Dantrel Boone, Samson Adenugna, and Joshua Bennett, is to be dedicated on June 19, now the Juneteenth National Independence Day national holiday, to celebrate the day in Galveston in 1865 when the last enslaved African Americans learned that they were free. (Photo by Francois PICARD / AFP) / RESTRICTED TO EDITORIAL USE – MANDATORY MENTION OF THE ARTIST UPON PUBLICATION – TO ILLUSTRATE THE EVENT AS SPECIFIED IN THE CAPTION (Photo by FRANCOIS PICARD/AFP via Getty Images)

The relevance of Juneteenth today

The Black Lives Matter movement began following the killing of George Floyd at the hands of police, which led to thousands of people protesting the social inequities between black people and the system today. The protests led to many different changes, including police reform, and addressed racial discrimination and misconduct by the police, governments, and companies.

After these significant upheavals, Juneteenth was given even more specialized attention. As awareness grew of the systemic disadvantages black Americans face at the hands of police, the war on drugs, social inequities, and civil unrest, Juneteenth has become more culturally relevant than ever. There are parallels between the end of the civil war and the civil unrest we’ve seen even today.

How you can celebrate Juneteenth

No matter your race, heritage, or creed, Juneteenth is a celebration of equality and American freedoms and liberties, like the 4th of July celebrations that celebrate American Independence. It’s also a nod to promoting social equality and equity in business and in daily life.

No matter what your background looks like, you can celebrate Juneteenth by demanding for and supporting legislation bills that promote social equity programs. You can also take the time to support black organizations, businesses, and individuals in your community.

You should also feel free to join in on the local Juneteenth celebrations in your area and take some time to visit African American museums, businesses, and cultural sites. We are all free, we are all equal, and we can all celebrate together.

Juneteenth is a celebration of black history, equality, freedom, and independence. You can think of it as a holiday similar to the 4th of July, celebrating heritage and freedom for African-Americans who didn’t earn their independence until over 85 years after American colonies separated from British rule in 1776. No matter who you are, you can celebrate Juneteenth. The first step is being aware of what it is, the cultural relevance of the holiday, and how you can join in on the festivities and the fun.

Juneteenth Sale at The Hemptender

As you may already know, The Hemptender is a black-owned business based in North Carolina, and we celebrate Juneteenth. We’ll be having a sale at both our Durham and Cary locations from June 16th to June 19th. In-store, you can enjoy 50% off all of our Hemptender brand products and 20% off everything else. If you prefer to shop online, you’ll save 20% with a coupon that automatically applies at checkout.