The Top 8 Hemp Terpenes and What They Do 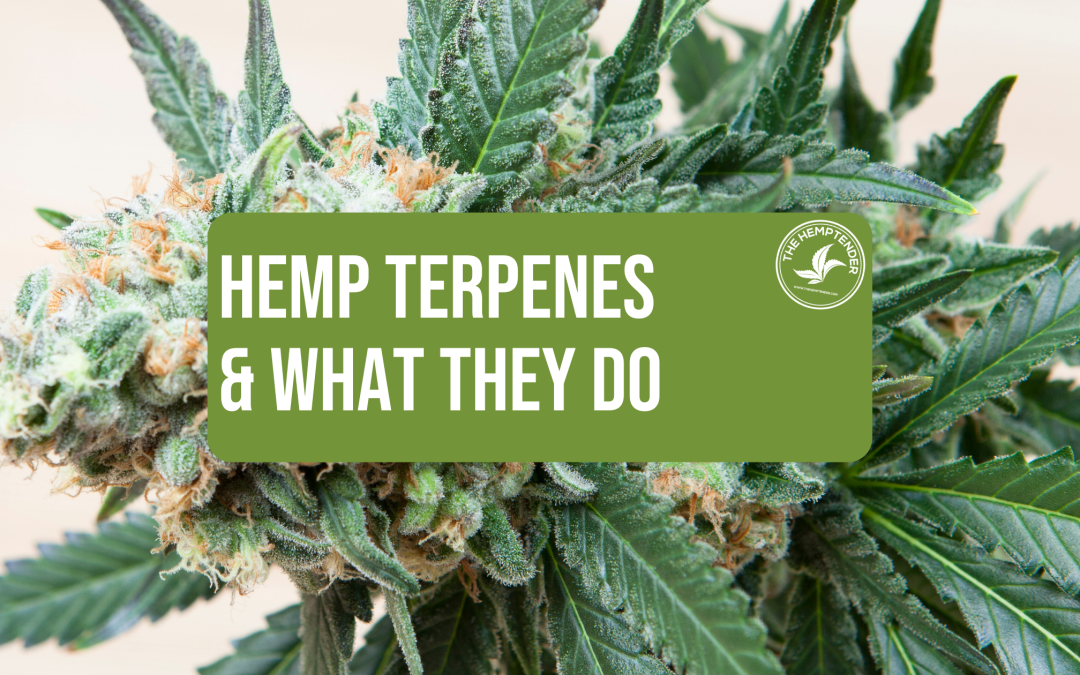 Have you ever taken a big whiff of a hemp flower? Did it crinkle your nose with dank earthy aromas, or did its sweet and fruity smell make your mouth water? Hemp is one of the most diverse flowering plants out there when it comes to flavors and aromas, and that’s all thanks to terpenes. While CBD is often credited for the effects caused by hemp, terpenes also play a significant role in how certain strains smell, taste, and affect you. Here’s everything you need to know about terpenes, including what they are, how they work, and which ones you’ll see the most often in hemp and cannabis strains.

Terpenes are all-natural chemical compounds found in every species of plant on earth. They are even produced by some insects and are solely responsible for the way plants smell and taste. You can think of these hydrocarbons as the essence of plants or their essential oils.

Think of your favorite fruit – let’s say it’s strawberries, for example. You’ll notice that the fruits taste and smell much different than the foliage that makes up the strawberry plant. This is thanks to the hundreds of terpenes that make up the plant. Flavors and odors are made up of a combination of terpenes which all serve a different purpose within the plant. The foliage of the strawberry plant is bitter, making it less likely for insects to eat the leaves. However, the sweet fruits are attractive to birds which helps them spread their seeds. The terpene profile of each plant plays a unique role in the ecosystem, so it’s a lot more than just scents and flavors!

In fact, each terpene isolate comes with its own list of unique potential health benefits and therapeutic properties. The same terpenes responsible for the bitter flavor in the foliage in the example above also have antibacterial, insecticidal, or other properties that help protect the plant from harm. In recent years, we’ve discovered just how big of a role terpenes play in their environments and a whole list of health benefits that extend to our bodies when we eat or smoke them.

As cannabis and hemp continue to become legalized in more places across the country, scientists can better study terpenes. The green rush has generated massive interest in these compounds, allowing scientists to research each one more thoroughly. Current studies show that terpenes interact with our endocannabinoid system in the same way that cannabinoids like THC and CBD do. Terpenes can boost and limit the effects of the 100+ cannabinoids found in cannabis and hemp. In fact, cannabinoids have been found to be more effective when they’re taken with terpenes than when they’re taken alone, thanks to the discovery of a phenomenon known as the Entourage Effect.

What is the Entourage Effect?

The Entourage effect is a documented phenomenon first discovered in 2006 by Dr. Ethan Russo, the Director of Research and Development at International Cannabis and Cannabinoids Institute and a Senior Medical Advisor to GW Pharmaceuticals. His first round of research found that CBD made THC less effective, so he explored the complex relationship between these two cannabinoids. In the process, he discovered that terpenes and cannabinoids all interact with each other within our endocannabinoid systems and are responsible for most of the effects we see in medicinal plants like hemp.

Before the 2010s, cultivators and consumers alike were only focused on growing plants that contained lots and lots of THC. In selectively breeding strains to produce more THC, the plants also began producing fewer terpenes and other cannabinoids. Eventually, the community realized that there was a lot more to cannabis than THC alone. Even with THC percentages over 25%, these strains didn’t feel as potent as classic strains with less THC. Why? Because they were lacking other cannabinoids and terpenes. Further research conducted after Dr. Russo’s initial discovery found that the full spectrum of cannabinoids and their terpenes worked together to boost the effectiveness of each compound.

Most people who use cannabis or hemp are aware that each strain has a unique smell and flavor thanks to terpenes, though many are unaware of the complex connection these compounds share with one another. Take medical patients, for example. Some patients use CBD for pain, while others use it for anxiety. So what exactly makes a strain more effective at treating these symptoms than others with a similar CBD level? That’s where the entourage effect comes in.

In Dr. Russo’s conclusion, he wrote that terpenes offer “complementary pharmacological activities that may strengthen and broaden clinical applications and improve the therapeutic index of cannabis extracts.” This just means that terpenes make cannabinoids more effective and vice versa.

Each cannabis and hemp strain has a unique terpene profile of over 100 different terpene isolates responsible for how the strain will taste and smell. However, each one also affects cannabinoids and the endocannabinoid system in a unique way. Some terpenes offer similar effects to cannabinoids, and some terpenes even act like cannabinoids within the body. The entourage effect shows that similar cannabinoids and terpenes boost each other’s effects.

Take CBD, for example. This cannabinoid is known for reducing anxiety and reducing pain. However, terpenes like b-Caryophyllene and Linalool are also good at reducing anxiety and pain. These terpenes also have anti-inflammatory and pain-reducing effects on their own. With that said, when these compounds come together, they produce more powerful relaxing and pain-relieving effects than they would if each one was taken on its own. These cannabinoids and terpenes are often found together in the same hemp strain, which would make it a better choice than other strains for anxiety or pain relief.

The entourage effect highlights this relationship and shows that full-spectrum cannabis (cannabis that contains the full spectrum of cannabinoids and natural terpenes) is more effective than isolated cannabinoids or terpenes alone.

This relationship also highlights that terpenes are responsible for the typical indica, sativa, and hybrid effects you’re familiar with. Since each strain contains a unique ratio of terpenes and cannabinoids, each will offer different results. Terpenes like b-caryophyllene and myrcene are more commonly found in strains that promote relaxing, indica-like effects, while strains with energizing or cerebral, sativa-like effects are more likely to contain limonene or pinene.

That was a lot to cover, so here’s a little cheat sheet:

While there are hundreds of terpene isolates out there, only a handful make up the most significant percentage of terpenes found in cannabis and hemp strains. Below are the most common hemp terpenes, as well as their uses and effects.

At the end of the day, hemp is so medicinally valuable and therapeutic thanks to its high concentrations of both cannabinoids and terpenes. Each one plays an essential role within the body, and they all work together to promote desirable effects. Even your favorite fruits, vegetables, herbs, and spices contain high concentrations of terpenes that promote wellness within the body. They’re set to become the next health craze, so make sure the bud you smoke is fragrant and flavorful for best results.